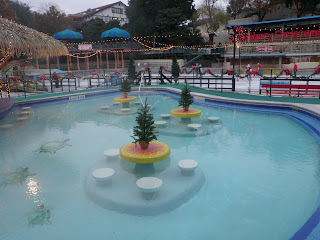 Christmas today
What does Christmas mean today?  We often think of presents all wrapped up with pretty wrapping paper and bows.  Kids get the toys they wanted all year.  We decorate our homes with Christmas trees that have all sorts of ornaments.  We see Santa Claus with his reindeer and sleigh in stores and on TV.  Businesses are closed so people can spend time with their families.

We have sometimes even gotten away from calling it "Christmas".  We now also refer to this time as the "Holiday Season".  We also say "Happy Holidays" and "Seasons Greetings" instead of "Merry Christmas".

What are we celebrating?
We also sometimes see nativity scenes.  A nativity scene is a symbol.  A symbol represents something, so what does it represent?

The true meaning of Christmas is about Jesus' birthday.  Jesus died on the cross so we can have eternal life(John 3:16).  He took the punishment for our sins that we ourselves could never completely wipe away.

The Gospel of Luke has the most about the birth of Jesus.  It describes shepherds being guided to Jesus’ birth place by an angel:

And there were in the same country shepherds abiding in the field, keeping watch over their flock by night. And, lo, the angel of the Lord came upon them, and the glory of the Lord shone round about them: and they were sore afraid. And the angel said unto them, Fear not: for, behold, I bring you good tidings of great joy, which shall be to all people. For unto you is born this day in the city of David a Saviour, which is Christ the Lord. And this shall be a sign unto you; Ye shall find the babe wrapped in swaddling clothes, lying in a manger. And suddenly there was with the angel a multitude of the heavenly host praising God, and saying, Glory to God in the highest, and on earth peace, good will toward men. (Luke 2:8-14 KJV)

We spend time and money getting gifts for Christmas.  However, God gave us the best possible gift, the chance to have eternal life through Jesus.  How often are we reminded of this around the holiday season?  Society has for the most part lost its way and the true meaning of this holiday.  Perhaps the best way to summarize is this line from the movie The Perfect Gift:

What if the world threw you a birthday party and you weren't invited?

Posted by tourofheaven at 12:02 PM No comments: 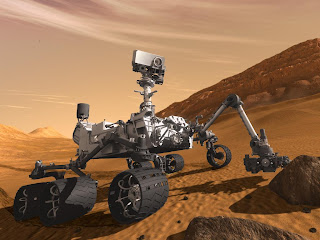 Last Saturday NASA launched the Mars Science Laboratory rover, better known as Curiosity.  Although we have sent rovers to Mars before, this one will be the largest ever.  Launching anything is always a nerve-wrecking experience, but the most intense part of this mission will be landing on the surface of Mars.  About 2/3 of all missions to Mars have failed due to various technical reasons.

Mars has held a certain fascination for us.  It has a large canyon system that would dwarf the Grand Canyon on Earth.  Evidence now shows the planet probably had flowing water sometime in its past.  It also has dust storms that can spread over its entire surface.

Seeing planets like this makes us marvel at God's creation.  In the beginning, God created the universe(Gen. 1:1).  The stars and the heavens above declare the glory of God(Psa. 19:1).

Humans likely won't be going to Mars anything soon due to the money required among technical problems.  One is all the deadly radiation the planet gets.  Astronauts would also have to find a way to grow food and replenish water.  We also don't have a deep enough understanding of the planet and the long-term spaceflight that will be required.

Even if we are never able to travel to Mars like we can travel from New York to Los Angeles, we can take comfort we will have a new universe to ourselves that will be greater than this one(Rev. 21:1).  In the new universe none of the current problems we face in spaceflight will exist.   If the new universe includes Mars, what would New Mars be like?  Right now we can only imagine.

Posted by tourofheaven at 5:29 PM No comments: 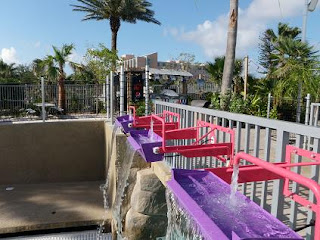 Wealth and money have been in the news more than usual over the last few years.  First we heard terms such as subprime mortgages and credit default swaps.  Lately subjects have included income disparity, the recession and the situation in Greece just to name a few.

Earthly wealth
There are all kinds of earthly wealth - money, gold, stocks.  Some spend their lives building up earthly wealth as they think that's the only kind there is.  No matter how much money we have, we never seem to have enough.

Lay not up for yourselves treasures upon earth, where moth and rust doth corrupt, and where thieves break through and steal(Matt. 6:19 KJV)

Fancy clothes, money, gold and other precious metals can lose value over time(where moth and rust doth corrupt).  Moths destroy clothes while metal rusts.  The value of currency, gold and other commodities has gone up but inevitably goes down.  Something else about earthly treasures is thieves can steal them(where thieves break through and steal).

Jesus is not saying we shouldn't save our money or have earthly treasures.  We should save for the future and emergencies.  Rather we should not be too consumed by earthly wealth or covet it.  We also should not store it at the cost of eternal wealth.

But lay up for yourselves treasures in heaven, where neither moth nor rust doth corrupt, and where thieves do not break through nor steal(Matt. 6:20)

Unlike earthly wealth, eternal wealth never loses its value.  Thieves also can never steal it from us.

How do we get eternal wealth?  Our good works on Earth allow us to accumulate it.  When we spread the Word, forgive others or donate generously, we store up eternal treasures like making a deposit into a bank account or 401K.

With all the troubles of this world, this all might not be any consolation as we cannot check on our eternal rewards like we can with an online bank account or a 401K.  However, the Apostle Paul says

We tend to only look at things that can be seen, but they are only temporary.  Money, gold and other material possessions will eventually disappear in a fire, flood or some other way.  The things we can't see have the most value and last forever.  Perhaps the best way to close is this quote from Jesus:

For where your treasure is, there will your heart be also(Matt. 6:21)

Posted by tourofheaven at 7:48 PM No comments:

The Beginning and End of Death

Introduction
Death is generally not something we like to discuss or think about.  After all, it can be a depressing subject.  Most people go through life thinking about it as little as possible or pretending it doesn't exist.It inevitably does come up when someone we know dies.  A recent example is when Steve Jobs died Oct. 5.  He was a visionary and former CEO of Apple.  His company is famous for the iPod, iPhone and iPad.  Countless people were saddened by his passing.When people such as Jobs die, some questions come up we often ask ourselves.  Why do we die and why would God allow death into this world?  How did it all start?The answer from the Garden of Eden
To find the answers we must go to the story of Adam and Eve in the Garden of Eden in Genesis.  At this point, there was no sin, death or suffering in the world.  This was the paradise we dream about.  In the middle of the Garden of Eden were the tree of life and the tree of knowledge of good and evil(Gen. 2:9).  God warned Adam not to eat from the tree of knowledge of good and evil or death would follow(Gen. 2:17).What happens next is likely the most famous story of the Bible.  A talking serpent convinces Adam and Eve to eat from the tree of knowledge of good and evil, disobeying God.  God then punishes Adam and Eve by cursing them and the earth.   He says to Eve:"I will greatly multiply thy sorrow and thy conception; in sorrow thou shalt bring forth children; and thy desire shall be to thy husband, and he shall rule over thee. " (Gen. 3:16 KJV)This meant God increased the agony Eve and women would have during child birth and would be mastered by their husbands.  God says to Adam:"Because thou hast hearkened unto the voice of thy wife, and hast eaten of the tree, of which I commanded thee, saying, Thou shalt not eat of it: cursed is the ground for thy sake; in sorrow shalt thou eat of it all the days of thy life; Thorns also and thistles shall it bring forth to thee; and thou shalt eat the herb of the field; In the sweat of thy face shalt thou eat bread, till thou return unto the ground; for out of it wast thou taken: for dust thou art, and unto dust shalt thou return."(Gen. 3:17-19)Adam would have to struggle to make a living and will eventually die("unto dust shalt thou return").  This was the beginning of the hardships we face in the world today.What isn't as well known is what happened after:"And the LORD God said, Behold, the man is become as one of us, to know good and evil: and now, lest he put forth his hand, and take also of the tree of life, and eat, and live for ever"(Gen. 3:22)God said humans must not be allowed to eat from the tree of life, or they will live forever.  God did not want man to live forever in a corrupted state, so he placed Cherubim and a flaming sword to guard the path to the tree of life.  Without access to the tree of life, death was introduced.  Death wasn’t some cruel act God placed on us but was an act of mercy.Redemption
Something else is before Adam and Eve were cursed, God promised a redeemer.  God says this to the serpent, who was Satan(Rev. 12:9; 20:2).  "And I will put enmity between thee and the woman, and between thy seed and her seed; it shall bruise thy head, and thou shalt bruise his heel."(Gen. 3:15)This marks the start of mankind's struggle against Satan.  Satan will cripple humanity.  However, a redeemer will deliver the fatal blow to Satan by bruising his head.  Who is this redeemer?  It’s none other than Jesus.Sin entered the world through Adam, with death following(Rom. 5:12).  However, life will enter through Jesus(Rom. 5:17).  Jesus took the sting out of death(1 Cor. 15:54-55).We can take assurance in eternity.  After this world ends, death will be thrown into the lake of fire(Rev. 20:14).  There it will never bother us again.
Posted by tourofheaven at 8:45 PM No comments: